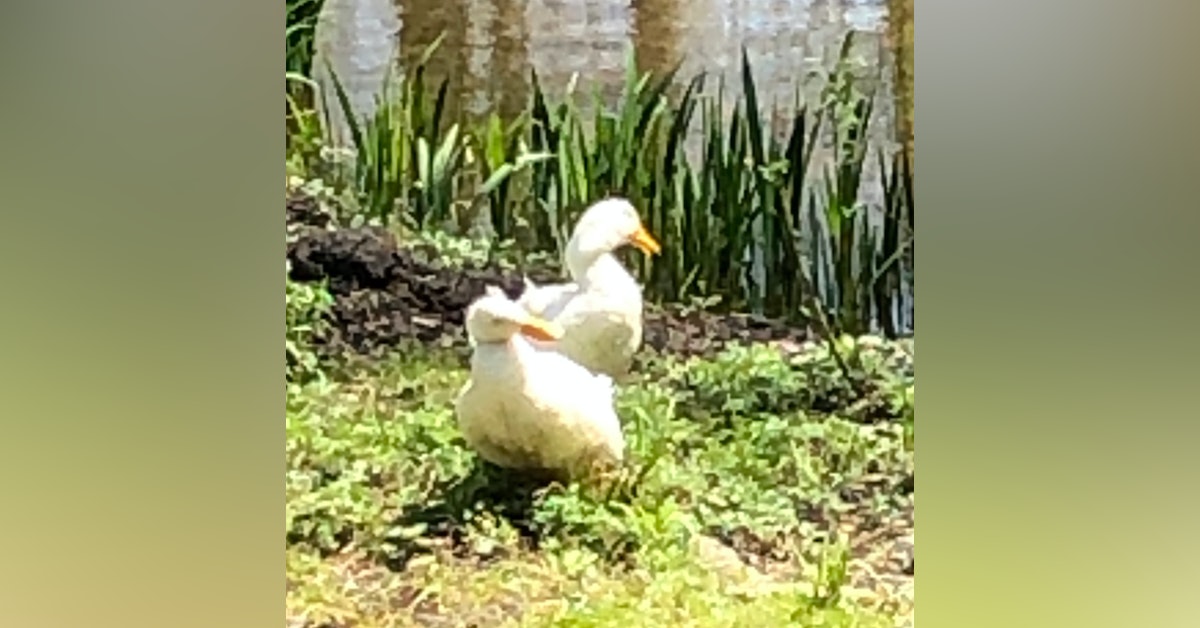 Ducks. Sheep. Goats. Coyotes. You can't live up here and not love animals. Well, most of them. In this episode of Cidiot, Mat share some highlights. Shout outs to Tivoli General, Winn's Tivoli, and Doorstep Market. Thanks for listening. Cidiot has been featured on Hudson Valley Magazine's "8 Hudson Valley Podcasts for All-Day Listening" and by Chronogram as one of "6 Hudson Valley Podcasts You Should Listen To." The Becoming a Cidiot eBook is coming so stay tuned for its release plus updated merch at the Cidiot store. For updates, visit cidiot.com, join the page at facebook.com/cidiotlife and follow @cidiot.hv on Instagram. Email: goats@cidiot.com

--- Send in a voice message: https://anchor.fm/cidiot/message

Mat: One thing about our garden in the late spring like now is that it is inviting. Lush green. Freshly mulched beds. Tulips red, yellow and even white. Purple flowers. I don’t know what they are.

You want to explore the garden, sit in it for hours.

We put chairs throughout it: three sets of Adirondack chairs, a bench by the creek, a picnic table by the road.

What Brian and I didn’t realize is all the animals that would also come. Birds. Bats. Bugs. And more recently ….Ducks.

We LOVE the ducks. There was a pair of them here several days a week swimming around, hanging out on the creek’s edge, even in the garden itself .

I could see them from the driveway, from the shed, from the deck. They would quack around like best friends, or lovers, I don’t know. We named them Ashwood and Sherwood after the streets I grew up on.

When we would approach, we could get pretty close before they would scurry into the water. Then they swim up and down the creek between us and the farm next door. I got a few video clips l posted on the Cidiot instagram.

Last Sunday, I went out for a run and then it was weird - I saw only one duck - squawking away. Louder than before.  Uh oh. Pretty soon I got a text from Brian - one of the ducks is missing! All day, we kept checking outside but kept hearing the one duck - was it Ashwood? - crying and alone. We were convinced that something happened. A hawk came down. Or maybe the farmer sold him to pay a debt.  We googled a few things before we read that maybe the other one was off protecting a nest from predators or having babies. Maybe. This would comfort me.

Then Brian came home and told me to sit down and pour a drink.

Taking to a farmer down the road, he learned the truth. Sherwood, duck #2, wasn’t home nesting but... a fox got her. The farmer found part of her on the property. One of the other neighbors doesn’t pen in their animals and the foxes come. I’m not pointing fingers at which neighbor, but you know I’m pointing fingers.  I get that this is nature. And this might seem like a cidiot reaction to care. But you know this was avoidable.  In this case, it was the locals who were the cidiots.

The lesson is learning to let nature run its course. Get attached to your dog but not to the farm animals. There’s a difference. The next morning though I was in the office working and heard a yelp from the bedroom. Brian was looking out the window and saw, wait for it,.... a second duck. Was it Sherwood? I haven’t been this excited since the Steven Sondheim anniversary special.

I ran out and got close to the fence. our duck - Ashwood was waddling down to the creek to swim towards us. Behind him was a second duck, although this one looked different. He/She/They had a red spot on the bill. Brian said something about maybe a pregnant duck gets those red spots. I figured this was a new suitor, a new friend. Not Sherwood. I didn’t care, we were happy.  The ducks together reached the water and moved on with their lives.

And we went on Google to find out how.

I’m Mat Zucker and this is Cidiot: Learning to live and love life in the Hudson Valley.

This much time without people, I’m realizing how much time I’m with animals …Haven’t seen the ducks this week. I’m worried but not worried. It’s a shame too since the garden is in full bloom - you should see the size of our tulips -  and they’d probably like it. Apparently, also they could help out. Ducks  can be good “weeders” which would help since the last thing I want right now is another asthma episode. Like last year.

In addition to the ducks are the geese, who are basically ducks, but assholes. Very protective. Thee’s a whole family of them that also swim by.

The sheep though are what have always mesmerized me. Every morning I walk Nora up the road past the sheep farm and see them out there grazing. Sometimes the field varies. I find them so peaceful. From our yard, it’s so wooded i can’t really see them so i fantasize about building a viewing stand where i can climb up and just sit there - with a coffee cup holder - and just watch them sheep around.

Chickens, though, confuse me. A lot of our neighbors have them, and i agree, there’s nothing like local fresh eggs . We buy eggs at either Sawkill Farm or Hearty Roots Farm every week. But chickens just seem so... chaotic. Our neighbors often let theirs roam around . So I have literarily seen a chicken crossing the road. We had a dead chicken incident recently but i won’t go into that here. I like chicken but I hate them. I value them but I don’t want them. They are the great paradox of farm land life.

A more clearly bad-news animal is the coyote. Everyone hates the coyote. The terrorist of farm land. The sounds they make terrify Nora and us too. There are stories of groups of coyotes ganging up on a lone lamb or dog. In winter it’s the worst because you know… they’re hungry.

Then there are bears. Few on our side of the river though I heard a story recently that there was so little traffic in the town of Millerton because of COVID that a bear was filmed running down the street. Bears are far more common on the west side of the Hudson up in Woodstock and Saugerties where Victor and Stephanie live. They’ve had them go after their garbage and had to get bear-proof lids.

Most farm animals don’t have names. The donkeys next door have names though. Bert and Ernie. Donkeys are fantastic and like every animal on the farm, they have a purpose - a job. One, they attract the pesky mosquitos away from the herd and don’t seem bothered by them. The other is they can warn of any nearby coyotes!

Now it’s time for an unpaid shout-out to businesses I like enough to recommend. The first two are TIVOLI GENERAL and WYNN’s which are owned by Natalie and Kozy- you might know the grocery Tivoli General but they recently opened a cute boutique across the street named Winn’s. Both are online to browse and buy.

I’m particularly thankful that they generously let Brian put his Little Free Library in front of Winn’s. Brian recently converted it to a Little Free Pantry where we and others have been donating canned and packaged goods especially for people without enough access to food. For groceries you want shipped or pick up, visit tivoli-general.com or for clothing, jewelry or accessories go to Winn’s at winns Tivoli dot com

The other place I wanted to mention is DOOR STEP MARKET - this is a new curated site of Hudson Valley Shops, created by the publishers of Edible magazines. There are more than a dozen shops for food, wellness, pets, experiences and you'll be supporting a lot of regional businesses through one spot. Please visit doorstep dot market and I’ll also put in the show notes.

Also - I’m about to publish a Cidiot ebook - a written guide to moving to the country based on content from the show. It’s called BECOMING A CIDIOT and will be available as a PDF and on Kindle for a low, low price. Visit Cidiot.com for links as well as a new store for merch.

Obviously there are more animals up here. Bobcats. Foxes. Alpacas.

And Goats. At sunset we can often watch our neighbors goats walk across their hill right from our front porch. Goats are really the circus clown of the farm. They always get into trouble.

Then there are dairy cows and beef cows. They’re different breeds and are raised differently — the dairy cows thinner.  I realized how little I know so I found some definitions from Kansas Farm Connection. Here’s your primer:

Horses too, of course, are up here. If you really love horses, you should visit the Equis Art Gallery online. Juliette, a Cidiot fan, has everything from jewelry to art for horse lovers.

But the thing about animals is not just watching them. For me, it’s the experience of watching them reminds me of our connection to them. We depend on what they make, or even themselves outright. They feed us with eggs, beef, pork and chicken. We buy goat soap. We knit - well I don’t knit - but my mother and mother in law and sister in law knit - with sheep wool.

Like animals, we sometimes go with the herd and sometimes are as lone as a mountain lion. Like animals, we follow directions most of the time but we often go rogue like a goat or a chicken. We may think about the future more than they do, but we also live in the moment when we remember to. We have a lot I common I think. We’re all dependent on each other. We breathe, we eat, we poop, we get sick, we get better, and we move on. The sun comes up for all of us every day. The farm is our center.

Thank you for listening to Cidiot. What a great time to live in the country. Keep an eye out for Becoming a Cidiot, the new ebook that’s also a handy guidebook and propaganda for moving up here. Follow us on Instagram and join the facebook page. Or just visit Cidiot.com anytime for more.